What I'm listening to. 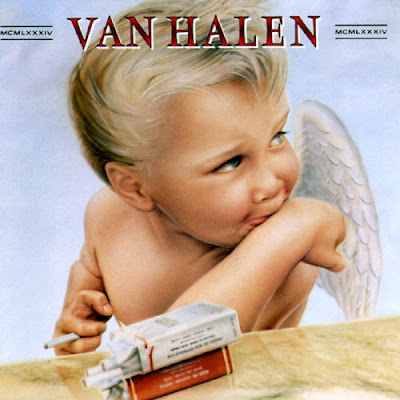 I spend most of my time at work drawing on my computer with itunes cranked up and my headphones on. I have a theory that '80s heavy metal is getting ready to come back big.

I don't know if my subconcious was tapped into the zeigiest of the emerging wave or maybe I'm just crazy, but today's audio flavor of the day was Van Halen's 1984!

1984 was the last salvo from the fire-breathing band that was the True-Van Halen. For those of you who may be too young to realize what this means, this was the last Van Halen outting with 'Diamond' David Lee Roth.

Nowadays, the Roth attitude seems a little worn thin, but at the time he was the coolest thing around. His hyper-manic delivery and Devil-may-care antics were the kind of thing every jr high boy wished they could pull off. And his machine gun delivery was the closed thing to rap this white boy had heard at the time.

And we loved it!

(My buddy DL Nelson told me he thought Sarah Palin should be in a Van Halen video. She could whip off her glasses and start dancing on the desks. If only, it might have turned the election!)

Too be honest, 1984 is really a pretty thin album. This was in the days of vinyl and it wasn't uncommon for an album to only have 8 - 10 songs on it. And really the best songs are Jump, Panama and Hot for Teacher.

(When David Lee Roth released his first solo album it only had 6 songs on it, because he said, 'Most albums only have a couple of good songs and the rest is filler. I just cut out the filler." Or something like that.

Early on in this post I mentioned I think early Heavy Metal is poised for a comeback. One reason: For awhile I had "Jump" as my ringtone. Everytime those opening chords would fire off, somebody would point at me and holler VAN HALEN!

Not exactly court admissable evidence, but I think the times are changing!
Posted by Scott Sackett at 11:17 PM