Back From Disney World!

Okay, we've been back for a while, but I've been busy working on a new comic. Here's my much belated DisneyWorld report.

We stayed at Downtown Disney Hotel this time, which is a first. We've either stayed off property or at a 'Disney' Hotel. We were gonna stay on property, but somehow all the hotels were full. My first, price is no object choice is the Polynesian. We stayed there a few years ago and it was awesome! But VERY expensive. My second choice is Port Orleans. It has a boat to downtown and is kinda cool and under $200 a night.

We stayed at the Grovsner, right across the street from downtown Disney. It was $75 a night, but the added about $25 of fees per night. My only complaint was it was kinda old and it felt like an old hotel, with a connecting door , thin walls and all that.

Still the price and proximity to Downtown made it worth staying at. We had a fridge and our first night I HIKED down the end of the block to leave Disney property and go to a grocery store. The walk was so far I loaded up and swore I was only doing that once!

Michelle and I have been going to WDW since '96, right before she graduated from college. While it's still fun I think in some ways its changed for the worse. Here's my reasons:

1) Vibe. Okay I'm gonna start off with the most elusive. The only way I can explain it is Disney used to have this kinda funky '70s vibe that I really liked. It's like it was well preserved. I know this sounds weird but here's some examples. 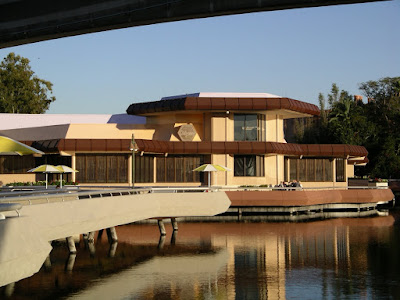 This used to be a resturaunt. Now it's empty! 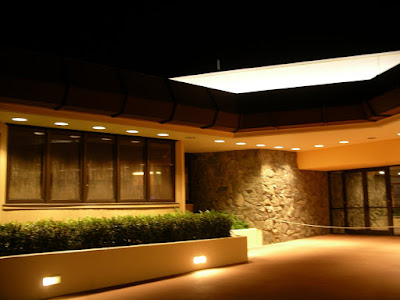 2)The Animation tour. WDW used to actually have animators working there.

3) The Virgin Megastore. They used to actually stock graphic novels and art books there. I picked up a bunch of my Mobeuis and Masamune Shirow trades there. Of course this was before Amazon and me going to San diego every year, but their stock has gotten bad.

4) Animal Kingdom. I hate this park! And I can't figure out why. It has the best theming. I think it feel too much like a zoo and that bugs me.

5) The Art of Disney store downtown. This store used to have nice stuff. I bought my 'Illusion of Life " there. Heck, we bought a coffee table there. They used to have shirts, books, furniture all kinds of stuff. Now it's just stautes and high end prints. Oh you can buy a 'cel' drawn by a Disney artist. You can sit there and watch him. I talked to the guy and he was super nice, but lets face it, that's not a cel. It's a guy copying from a model sheet. You could do the same thing yourself! I also have this same gripe about the store in Epcot, across from the Electric Umbrella. I guess my real beef is the stores used to sell some cool stuff, now it's junk from china.

I don't want you to think I didn't have fun, I had a blast. Walt Disney World used to have a cool 'feel' that I really liked and I think it's lost that.

Next i post about all the cool things we did!

Posted by Scott Sackett at 6:17 PM