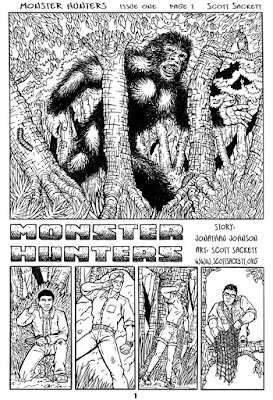 I mentioned I've been working on a new project. Here's the first page. The writer has a major publisher interested in the script, but them wanted to see a completed book. This publisher has also expressed interest in having me work on a project for them.

So we're hoping between them liking his script and my art, this will be a slam dunk.

However, one thing art has taught me, nothing is a slam dunk!

Plus, I'm insecure enough to figure the editor for this company who actually likes my art was an escaped mental patient, who has been recaptured by now!

Adding to my insecurity: I sent the first three pages to a bunch of comic people I know. NO ONE RESPONDED! None, nada, no one! I mean, I know these are busy people, but common I figure somebody would have sent me something, a simple looks good, leave me alone, whatever!

Remember, You know who you are, and I know where you live!

Posted by Scott Sackett at 7:56 PM