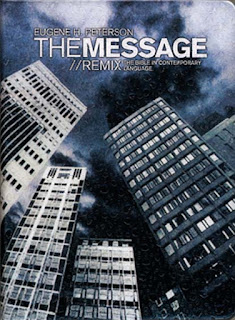 I have had my Bible since I was a kid. My poor Bible has been drug everywhere for 25 years. Like a weathered face, It's got a lot of character in it's scarred up surface.

However, lately the binding has started to crack and I'm afraid it's gonna fall apart. So I've been looking for a replacement. I figure I'll spend some real money and get another really nice Bible.

One thing I've been looking at is switching up versions. In the end I decided I just can't do it, I'm just too used to the wording and the cadence of the NIV and the new versions just don't read right.

However, several people suggested I get a The Message version. I was very sceptical because I had read online about how 'radical' it is.

One thing I've learned is the internet is no help deciding stuff like 'which version of the Bible should I read' because there are too many opinions and they're all worth exacly what they cost!

Well my father -in-law suggested I pick up a copy of The Message, he said I'd really like it.

So I decided to look around and see. I went to a few stores and one had this version of the message for half price. The cover is so cool with kind of a Matrxi-like photo of a cool urban landscape. Plus the cover is kind of rubberized with rain-drops on it. Exactly yhe kind of thing I dig.

However now that I got it I gotta say the best part is on the inside. I am inspired everytime I open this Bible, it's awesome! I've read the Bible virtually all my life, but this really speaks to me.

One thing I like is in the front, the author admits this is a paraphrase and uges readers to get a good study Bible.

And I'm still planning on getting me a nice NIV with the leather cover and all that jazz. And a local store is having an Easter sale, so I'll get one in a few weeks.

But man I really like this Bible and would urge anyone who doesn't read the Bible, but is maybe curious about God to give this a try. You won't regret it!
Posted by Scott Sackett at 8:36 AM