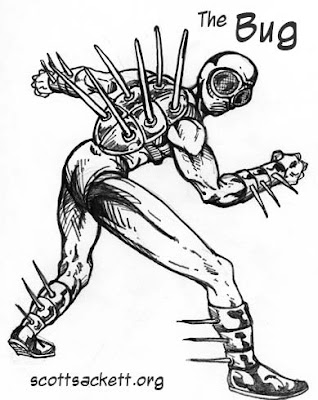 Main caracter for a comic I am writing and drawing for the San Diego Comcicon. I am envisoning the bug as sort of a cross between Spider-Man and Batman. Visually, I was inspired by a show we saw in NYC at the MoMA called Design and the Elastic Mind. It featured industral concept designs based on some pretty far out technologies with 3d design and nanotechnology.

My thought was, if in the '60s, a kid could whip up a spider suit, what could somebody whip up today? I wanted something that reflected 3d cad systems, manmade materials and rapid prototyping, rather then just a screen printed t-shirt.
Posted by Scott Sackett at 9:07 PM 1 comment: