King of Kong:A Fistful of Quarters 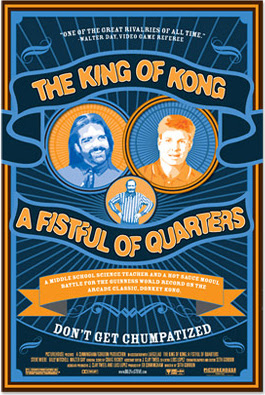 I am a video game kid. When I was a kid we had a Pong game (battery operated!) for our TV. I clearly remember when my brother and I saved up our half to buy an Atari 2600 (it was $150, Mom and Dad paid half) . I was a teenager in the heights of the '80s videogame boom.

The King of Kong is the documentary of the rivaly between two men over the title of world champion of Donkey Kong.

Owning the world record in Donkey Kong may seem like a trivial 'geek culture' goal, but The King of Kong is more than that.

The story starts off with Billy Mitchell, current holder of the Donkey Kong record and undisputed 'Gamer of the Century'. Confident and successful, the mullet-wearing Billy has it all. He even has his own brand of hot sauce!

"If all this can happen to me," says Billy "I know some poor bastard out there is getting shafted!"

Enter Steve Wiebe! Steve is a guy who just never got a break, always came up a little short. When Steve was laid off his job, he turned to video games, specifically Donkey Kong. When he heard of Billy Mitchell's 20 year old record score, he thought, "I can beat that!"

So He bought a Donkey Kong machine and started to practice. And practice. Until he beats it!

But that is just the start, this film has so many twists in it you will be constantly suprised. This is a rivalry story on par with any Rocky or Karate Kid. You will find yourself enjoying an interesting cast of characters, including someone called 'Mr. Awesome'.

And in the end you'll have to remind yourself 'This is a documentary.' You couldn't make this stuff up!

So if you're a video game kid or just someone who enjoy a good rivalry, my suggestion is to save up your quarters and go see The King of Kongs!

Posted by Scott Sackett at 9:39 PM

Nice review. Was this a great movie or what? I hope a lot of people see this movie. It has that something special quality to it.

Best movie I've seen in a while. It was awesome!